A Look At ABC & Its Exams in Virginia

The Association of Boards of Certification (ABC) program for the certification and licensing of water and wastewater operators seeks to create a uniform national certification program to replace the wide variety of such programs operating in the several states. Now that Virginia is one year into its relationship with ABC, it is important to recognize that ABC operates as an association of, and for the benefit of, its clients and members, namely the operator-certification (“OpCert”) authorities of some 40 state and international certification programs. Service to operators is neither its business purpose nor its mission. At first look, ABC’s program and notions seem to have merit. What is more apparent, however, is that in pursuing its objectives, ABC also positions and establishes itself as the sole national authority on operator certification and education. Not only does its client list imply endorsement, but ABC collaborates with other individuals, institutions and associations that further its philosophy. (See www.abccert.org and “Introduction to ABC’s 2017 Standardized Exams” webinar of September 20, 2017, posted to https://www.youtube.com/watch?v=XvVFXh-2gS4&feature=youtu.be&mc_cid=10d4dbe477&mc_eid=cbfa3a7df1)

At its core (and notwithstanding customization and “program specific modules” options available to its client states), the ABC concept effectively promotes a one-size-fits-all standardized national examination. This has been a goal of the organization since its beginnings 40 years ago. The 2017 emphasis is on providing exams conforming to national and international credentialing standards, ABC says to ensure that examinations are methodologically-sound, valid, legally-defensible, and unbiased. ABC claims that what they term their “rigorous psychometric process” is essential to meet certain ISO and other international standards. ABC goes on to assert across its elaborate and exhaustive website, throughout a recent webinar, and within its annual reports that such an approach is necessary and in the interest of both the states and operators. ABC further asserts that their approach promotes reciprocity between states, improves uniformity of operator training, education, and experience, increases operator prestige and professional standing, works to improve operator compensation, and better protects public health and the environment. In fact, however, what the ABC program offers is a cumbersome and unrealistic program that burdens operators and simultaneously takes power and authority away from them and the states.

As a first criticism, ABC’s philosophy and ideological embrace of the purported merits of the psychometric process confuses what I will term the ideal objective of the academic super operator with the very real and pressing need for real world actual operators –and with the very real and pressing need those same individuals have to obtain, keep, and advance in gainful employment for themselves and their families. Second, the ABC approach fails to recognize that operators have traditionally entered the water and wastewater profession from a wide range of other pursuits and occupations—even as retirement jobs—to such a degree, in fact, that utility operators likely comprise as diverse a workforce as can be found anywhere. Third, the ABC approach raises the bar on new operator credentials at a time when many working operators are retiring, and when a strong jobs economy diverts candidates to other employment opportunities. Fourth, by making the examinations more bookish and more difficult, the ABC program would have the world believe that an academic grasp of a multiplicity of water and wastewater utility content areas translates into competency and interest in actually operating facilities. Finally, ABC administrators envision a world—I might say they dream of a world—where a cadre of newly certified super operators will work harmoniously and effectively under the direction and supervision of the current cohort of operators—not all of whom exemplify ABC’s super operator, of course, simply for having entered the profession years ago—in the “good old days” of examination design, as a couple of ABC webinar presenters put it.

On the supposed value of furthering reciprocity between states, the situation at present for water and wastewater works operators is little different than, and arguably no worse than, that of nurses, teachers, lawyers, real estate salespersons, insurance agents, or many other professionals. Operators desiring or planning to work in another state may either apply for reciprocity in that state or take and pass an examination of that state. As an alternative and voluntary avenue, operators could already pursue ABC’s “distinguished professional operator” (PO) certification and designation—in the hope that their state of interest recognizes it. Moreover, even where one state adopts ABC protocols, it is still not assured that another state will accept ABC certification in lieu of its own without still requiring some state regulatory education and/or testing specific to its jurisdiction. So on the reciprocity front, the ABC program doesn’t necessarily advance the struggle to any great extent. (See the webinar referenced above and the discussion under the “reciprocity solutions for OpCert programs” tab at abccert.org. Also see the PO operator certification application form at http://www.abccert.org/pdf_docs/POContactForm.pdf; the online award ceremony videos available at https://www.youtube.com/watch?v=hFUauNF7Nk4 and www.youtube.com/watch?v= ShAGZLqFAnc, and the ABC 2014 annual report, http://www.abccert.org/publications/2014AnnualReport/2014AnnualReport.pdf  (accessed 9/22/17)

It is difficult to imagine where or under what circumstances methodological soundness, bias, validity or legal-defensibility of examinations has actually been an issue, but the lack of what I am calling super operators, standard examinations, and more convenient reciprocity is neither problem nor solution. Neither are concerns over existing public health or environmental protections the drivers here—not really. International credentialing standards direct ABC, yet American problems with certification reflect, first, a lack of interested candidates, followed by a lack of operator training and education, the burden that utility managers and administrators often place on operator candidates to obtain education on their own time and at their own expense, and the remarkable lack of clarity that still surrounds so-called “need-to-know criteria” in many states. Simply put, while operators can operate and understand their own facilities, they don’t always know what they are expected to know on the examination, or grasp that content to the breadth and depth required. And even “subject matter experts” and question writers confuse nice-to-know with need-to-know.

To understand what it means to be an operator or utility worker, the most significant and inalterable fact to be kept in mind—no matter how much it is overlooked, dismissed, or depreciated by ABC and other industry associations—is that utility operations require demanding, sometimes dangerous, and always health-effecting 24/7 shift work, over weekends, holidays, and nights, indoors and out of doors, and often with on-call responsibility. To be frank and plain here, those facts together—likely more than any other—reduce the attractiveness of the water and wastewater profession, and are facts that ABC’s lofty need-to-know criteria, stylish examinations, and higher entry standards will only make worse. The shortage of operators likely to develop as a result will jeopardize public health and environmental protection more than any problems we now have.

There is no intrinsic value in a program that replaces the intelligence, judgement, and discretion of Virginia’s own water and wastewater works operators respecting examination content and administration with that of subject matter experts, bureaucrats, and technocrats in other states and countries. One might even make the case that taking that route is harmful. Neither is it particularly important that supposedly “thousands” of operators and dozens of subject matter experts are said to have been involved in the examination development exercise, or how often that exercise is repeated or revised. What does matter in the development of state examinations are operators who know the culture, operators and treatment operations of their states. Particularly unhelpful and counterproductive is ABC’s emphasis on “psychometrics,” and the scope and breadth of need-to-know content areas. The devising and revising of those exam content areas, and the rolling out of new “editions” of examinations—as ABC has just done in 2017—only makes those exams into moving targets. I believe that many would agree that making water environment examinations needlessly elaborate makes no more sense than requiring drivers who seek a motor vehicle operator’s license to know details of engine design, facts surrounding lubricant and fuel composition, or the weather and road characteristics of all the states in which they may one day drive . In fact, to do so creates the very same problems with respect to state and individual certification expense, adequacy of operator knowledge, success in passing the examinations, and the availability of certified operators that the ABC program claims to solve. Who benefits from this kind of game? It is an ironic twist that the ABC examination concept, with three levels of question complexity and difficulty, drawing on three types of supporting knowledge, offers certification examinations so broad and challenging that a candidate may not be able to attain certification to work even in his or her own state, much less to work in other states! As Paul D. Bishop, CAE of the organization writes in introducing ABC’s webinar on its 2017 edition examinations

“We are grateful to the thousands of industry professionals who have worked tirelessly over the past three years to develop the 2017 Standardized Exams. These exams are the strongest ABC has ever produced….” (emphasis added)

As impressive and praiseworthy as this may sound, this concept is nothing if not high-handed, inflexible, unreasonable, and unfair to candidates pursuing certification.

Virginia should reassert and reclaim state sovereignty and authority in this matter, and realign exam content, design, and administration with the Commonwealth’s own treatment practices and policy traditions. Specifically, Virginia examinations should return to exam questions selected by Virginia operators, that address appropriate and clear need-to-know content areas relevant and applicable to Virginia, given over the same four-hour time period as formerly, and perhaps also with some type of open-book administration as before. In addition, while keeping the new 100 question format, Virginia exams should jettison any extra questions that ABC calls “pretest questions.” Besides unfairly consuming a candidate’s time, it is simply not the responsibility of examinees to test new questions for ABC’s convenience.

Together, these changes would return Virginia to its position prior to the current ABC-AMP/PSI arrangement. To make them would be no loss. Indeed, without a return to common sense it will scarcely be possible for licensure candidates to prepare themselves for questions in content areas so numerous, and in need-to-know content areas so broad and comprehensive, as ABC outlines. As things now stand, too many candidates who review ABC’s need-to-know criteria will begin to give thought to other employment. Plainly, candidate failure and discouragement will increase utility and candidate expenses for application and examination fees and travel, will reduce availability of operators during this period of workforce transition and full employment, will further limit entrants to the field, and, ultimately, will lessen public health and environmental protections in Virginia. This is worse than unfortunate, it is unacceptable. Whether you share this view or not, I believe we would all agree that Virginia operators and owners should make their views known while Virginia’s arrangement with ABC is still open to change. 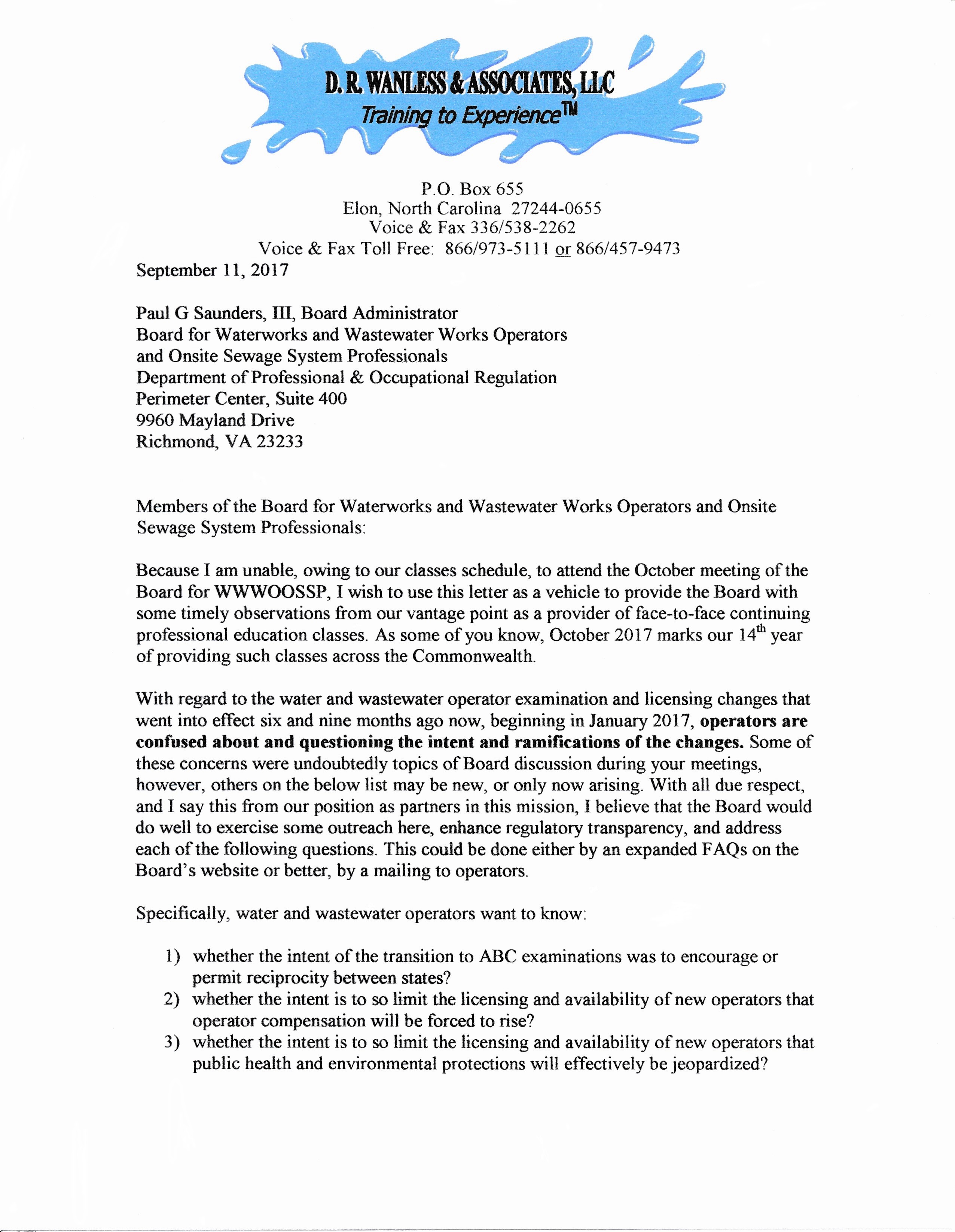 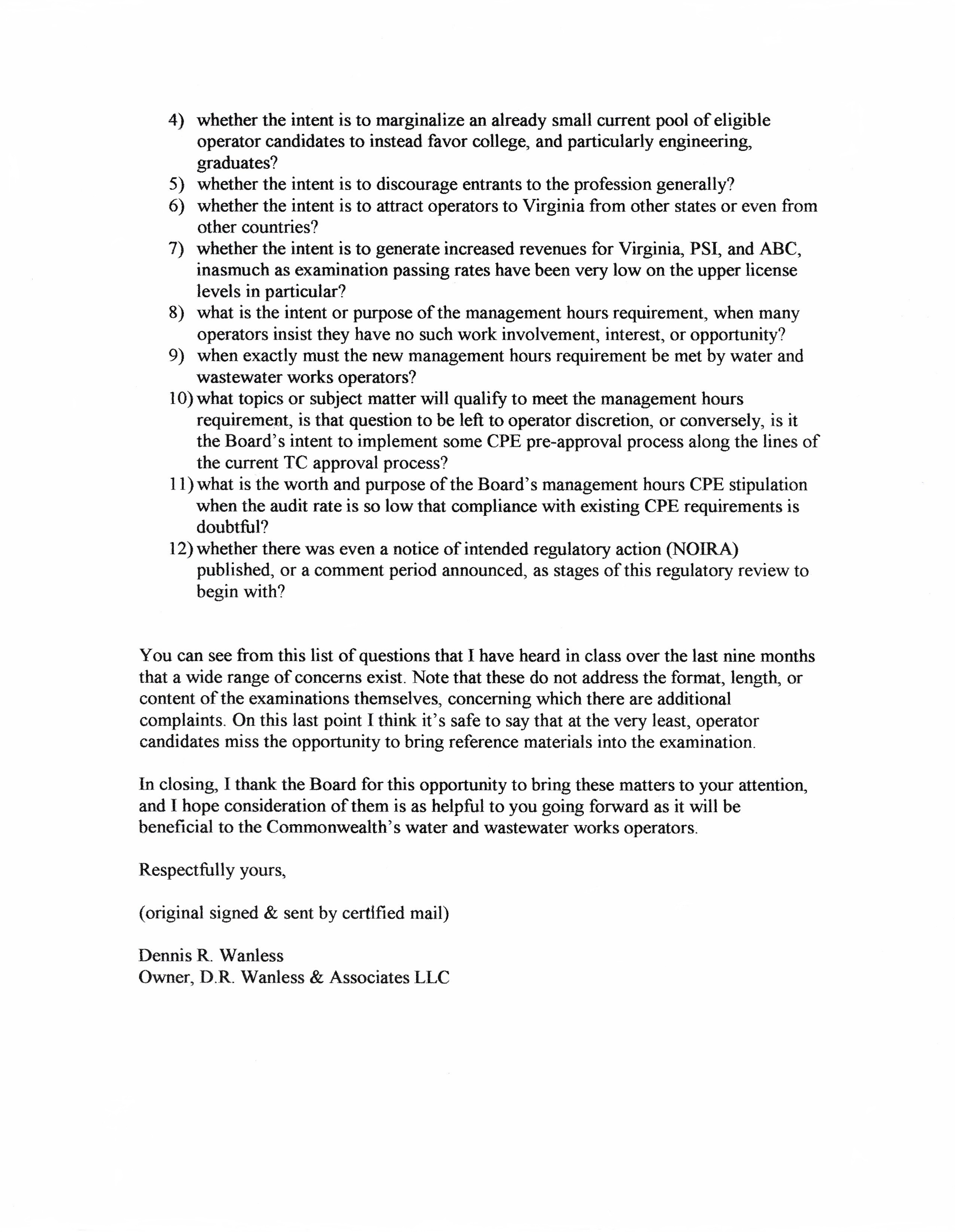 THIS SITE WORKS BEST ON A PC, LAPTOP, OR TABLET - IF IT LOOKS WONKY ON YOUR PHONE, WE HAVE DONE OUR BEST TO MAKE IT WORK FOR YOU.